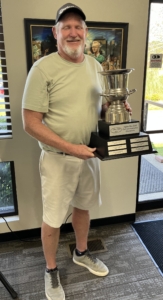 Jeff Bullen captures the 2022 Alpine Bay Golf, Club Championship
We had 66 members to compete in our Club Championship this past weekend. The weather was perfect for a tournament.
Jeff Bullen posted a score of 70 on the 1st day and followed it up with a score of 75 for a two day total of 145. 2nd place went to Jordan Whitfield with a two day total of 151. Austin Burnham finished one stroke behind Jordan for the 3rd place finish. On the Net side of the Championship flight, Chris Robertson took 1st with a net score of 137. 2nd place went to Austin Burnham with a net of 142.
The 1st Flight championship went to John (Foo) Dorsett with a score of 163. Shane Cleckler took 2nd place. On the net side, 1st place went to Bob Hopton-Jones and 2nd went to Don Carroll.
The 2022 Senior Champion is Bobby Denty and 2nd place was a tie between Moe Bassett and Rodney Guy. Steve Willingham took 1st place in the net and R D McDonald won 2nd.
In the Super Senior Division, Mike Sweatman outlasted Tony Evans for the Super Senior Championship. Pramod Bhatia won 1st in the net followed by John Harris who finished in 2nd.
This was our 1st year for a Women’s Division. Angie Stepp is our 2022 Ladies Club Champion. Heidi Martin is the net Ladies Champion. Thanks to all of the members that participated and we hope to have a bigger and better event next year.
I want to thank all of our grounds crew for having the course in very good shape for the tournament, in spite of the lack of rainfall that we have experienced here in Alpine. The fairways and bunkers are very good, the rough makes a difference and the greens were rolling well.
I also want to thank the clubhouse, grille workers and volunteers for their outstanding job. All of the meals and tournament preparations were well executed and successful.

2022 Labor Day Yellow Ball Results
We had 40 golfers divided into 10 teams to participate in our Labor Day Yellow Ball dogfight. We had a few intermitting showers during the round but we all managed to finished relatively dry. There were 10 Yellow balls that went out and only 7 returned.
The team of Rodney Guy, Foo Dorsett, Vaughn Wahl and Michelle Whisman took 1st in the Yellow Ball tournament. They returned with their Yellow Ball and their Yellow Ball score was +1.25 above their quota. Mike Sweatman, Jim Gorman, Morris Thomas and Matthew Whisman came in 2nd with a total of +.5 above their quota. There was a tie for 3rd place with the team of Jeff Bullen, Doud MacMurdo, Steve Willingham & Jamie Kimberly and the team of Brandon Fincher, Tommy Griffin, Gib Johnson & Ray Lineberry.
In the regular dogfight portion of the tournament, 1st place went to Mike Sweatman’s team and Rodney Guy’s tem finished in 2nd. The 3rd place team consisted of Ray Ferguson, Justin Tripp, Brian Galloway and Matt Osborne.
Michelle Whisman was awarded the cash for most over her points. Michelle was +6 for the day. Mike Sweatman won a closest to the pin on hole #4 and Sam Cooper won it on hole #17. Team Fincher won two skins, Jeff Bullen’s team won two skins, Rodney Guy’s team also won two skins and Mike Griffin’s team won one skin.
Thanks to everyone that chose to play and thanks to our staff for their efforts to provide a fun day at Alpine Bay.